I don’t have clinical depression, but I grew up around it. My brother, my sister, my father all have–had–varying degrees and diagnosis.

I am certainly not an expert. I’m a compassionate outsider looking in.

But I hope as someone who has witnessed its aftermath, I can help bring some more understanding around it, especially to those with no experience.

First, I’d want to direct you to someone who not only has experienced it first hand, but who can say it far more eloquently than I can, Mr. Stephen Fry.

Secondly, I really need you to understand this seemingly simple concept: Depression is a disease.

I’m going to pull a page from the article I referenced earlier and I want you to imagine that we’re talking about cancer. And think about all the amazing strides we’ve made in medical science to curing it. Think of all that work and how regrettably in some cases all of that work is still not enough to save a person.

Now imagine that we didn’t take cancer seriously. Imagine for a moment that it didn’t resonate that small little ache with almost anyone who hears it. Imagine that people judged you rather than embraced you when you told them you had cancer. Imagine feeling embarrassed for just visiting your doctor or taking your medication. That people told you that you just needed to “snap out of it”, that you weren’t trying hard enough and that’s why your tumors were growing.

This is how our society treats depression. This is also, perhaps, why the suicide rate is nearly double that of homicide.

Yesterday I talked about my brother and how important it was to take care of yourself.

I was approached by an acquaintance who, despite their good intentions, said perhaps one of the most ignorant response I’ve ever heard in reaction to suicide. “I don’t agree with his decision but I respect that it was his decision.”

First, never tell anyone that you respect their loved one’s choice to end their own life–you don’t know the situation. You also do not know THAT person’s mental state and were I far less stable in my mourning process, his words could have caused a whole new set of problems.

Please, understand that suicide is not a ‘do-not-resuscitate’ request.

Second, it was not his decision. And that is the most important thing of all to remember. My brother struggled with mental illness. When we were younger it manifested in violent fits of rage, as we grew, he turned more inward and while those fits were less common, they were more often turned on himself.

He was sick. And because he was ashamed of that, he didn’t get help–he didn’t want help. And eventually that disease ate enough of him that he became convinced he did not deserve help.

Joel was right when he said there was nothing any of us could have done to stop him. However, it would be a lie to say that means what happened could not have been prevented. And that’s why this cause is so important to me.

He wasn’t taking his medication and he refused to talk to anyone about it–friends or professionals.  He had long let the disease rule him.

People deserve to have control over their lives, to be able to think clearly.

Depression doesn’t allow that. You can try to down-talk its impact on people’s lives all you want but it will not change the fact that it is a mental illness. It is a disease, a sickness, a literal imbalance of chemicals in your body. It needs to be treated with respect and above all it needs to be treated.

A person is not weak for needing medication to get through day-to-day. To feel normal.

People take medication every day for their heart, for diabetes, to keep things like HIV and cancer at bay. Why have we got it in our brains that depression is any different?

Maybe it’s that word. The fact that we use it interchangeably for simply feeling sad–for being upset by external causes.

But as someone who has watched it tear at my family for as long as I can remember, please believe me, it’s a very real disease. And it’s one I intend to fight with all my strength.

If you think you may have clinical depression, please see someone. Do not be ashamed of something you have absolutely no control of. There is no just “snapping out” of a chemical imbalance, just like you can’t snap out of having a blood disease or a brain tumor.

It’s a hard process, and it will take time to find what’s right for you. But it can and will get better. And you deserve to feel comfortable in your own skin. That voice that says you aren’t worth it? It’s a damn liar. And it could not be more wrong about you.

You, my wonderful friends, are independently awesome.

This seemed like an appropriate day as any to try to start up a more regular schedule again. After all, one of the things I am very thankful for today would definitely being getting back to a 40-hour work week. While I know everyone was understanding, I missed being able to write here regularly.

50 hours at work, plus videos on my personal channel on top of my Geek & Sundry vlogs, working on Terra Mirum… it gets a tad exhausting. So while I think taking a bit a break from writing here was probably the best thing for me at the time, I’m really excited that I’m going to be able to get back to a more regular schedule.

If you’re in the United States, today you’ll possibly be celebrating Thanksgiving with your family or loved ones.

Either way, it’s fairly likely you’re getting those warm fuzzy feelings you get around the holidays when we remember those things we’re grateful for.

Yes, it’s going to be one of those cliche kinds of Thanksgiving posts.

But you know what? Thursdays are for Happy Thoughts and this is definitely what I’m vibing on today. 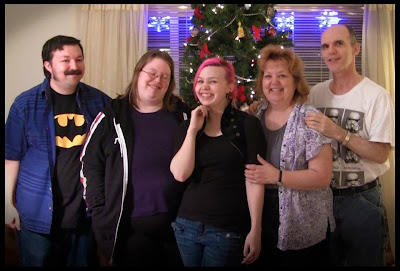 Almost a year ago today, we were taking pictures for family Christmas letters. All five of us.
I could spend this post talking about how we miss my brother, and how the holiday feels different without him and while it probably would be a little cathartic at first, I’m not sure how beneficial it would be in the long run.
Of course we miss him.
But I think more important than that is how as a family we’ve been repairing ourselves. It’s been a slow and difficult process–and I don’t think it will be over any time soon.
I know I say this a lot, but if anyone tells you how you’re “supposed” to mourn, shut that down immediately.
The point being that the house I came home to last night was not the one I woke up to this morning.
When I arrived, my father was in my brother’s room on his laptop, like he has been since the funeral, quiet and keeping to himself. We’ve all been sort of keeping to ourselves, I suppose.
But this morning I woke up to my mother starting the turkey and my father prepping grandma’s famous roll recipe (Thanksgiving is one of those holidays where I say, “Sorry intestines” and just grin and bear the inevitable gluten and dairy induced pain). They were joking around with a movie playing in the background. 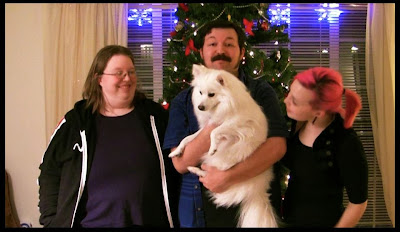 Since then we made a modest breakfast, chatted, played with the dog…
For the first time in this house, we felt like a family again. And I actually knew that eventually we’d be okay. It wouldn’t be the same, but we’d be okay.
I’m eternally grateful for that.
It’s been a hard year for all of us and we’ve got a lot to conquer ahead of us. But I think we’ll get there.
This was a year of a lot of hard work paying off. I’ve met some amazing people who I’m looking forward to getting to know better and while the past 7 months have been stressful, I’ve had the privilege of working on a game franchise I’m exceptionally proud of.
And of course, and certainly not least, on top of my family and my friends who I’m very blessed to have, I have you. People I’ve never had the pleasure of meeting in person, who I still get to converse with. People who have extended their compassion to me even though we were hardly better than strangers.
In some ways, I’m the most grateful for you. You’re constant proof that the world is full of good people. That even when it seems dark and bleak, there’s hope.
So thank you.
I hope today is full of love for you.